BOCES was created to promote partnerships between the community, school districts and the nearest community college to provide educational services that would otherwise not be available to students.

For more information on Sweetwater BOCES and their programs and schedules visit sweetwaterboces.com.

Video-Thank you BOCES for all you do!

Northpark Elementary and Pilot Butte Elementary benefit from Sweetwater BOCES grants through funds to support paraprofessional support in the classroom. 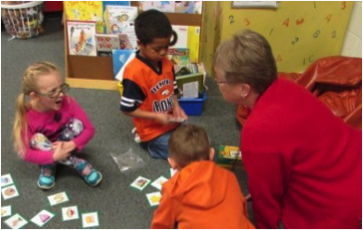 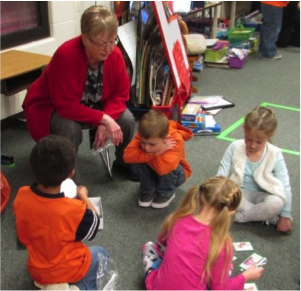 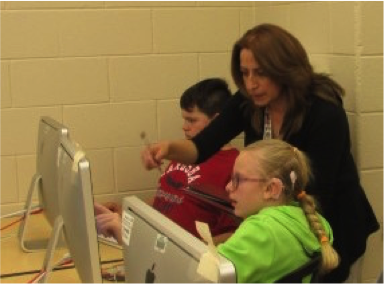 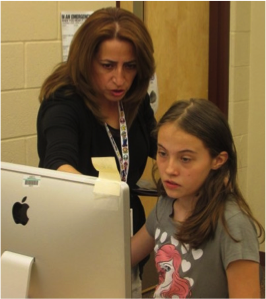 The grant received from Sweetwater BOCES for the Advanced Aquatics Program allows students at Rock Springs High School to receive a Professional Association of Diving Instructors (PADI) national certification in scuba diving along with certifications in CPR, First Aid, and Red Cross Life Guard. This year the grant was also used to update equipment such as wet suits, safety equipment and first aid supplies. The certifications earned in this course allow students to find full or part time jobs. 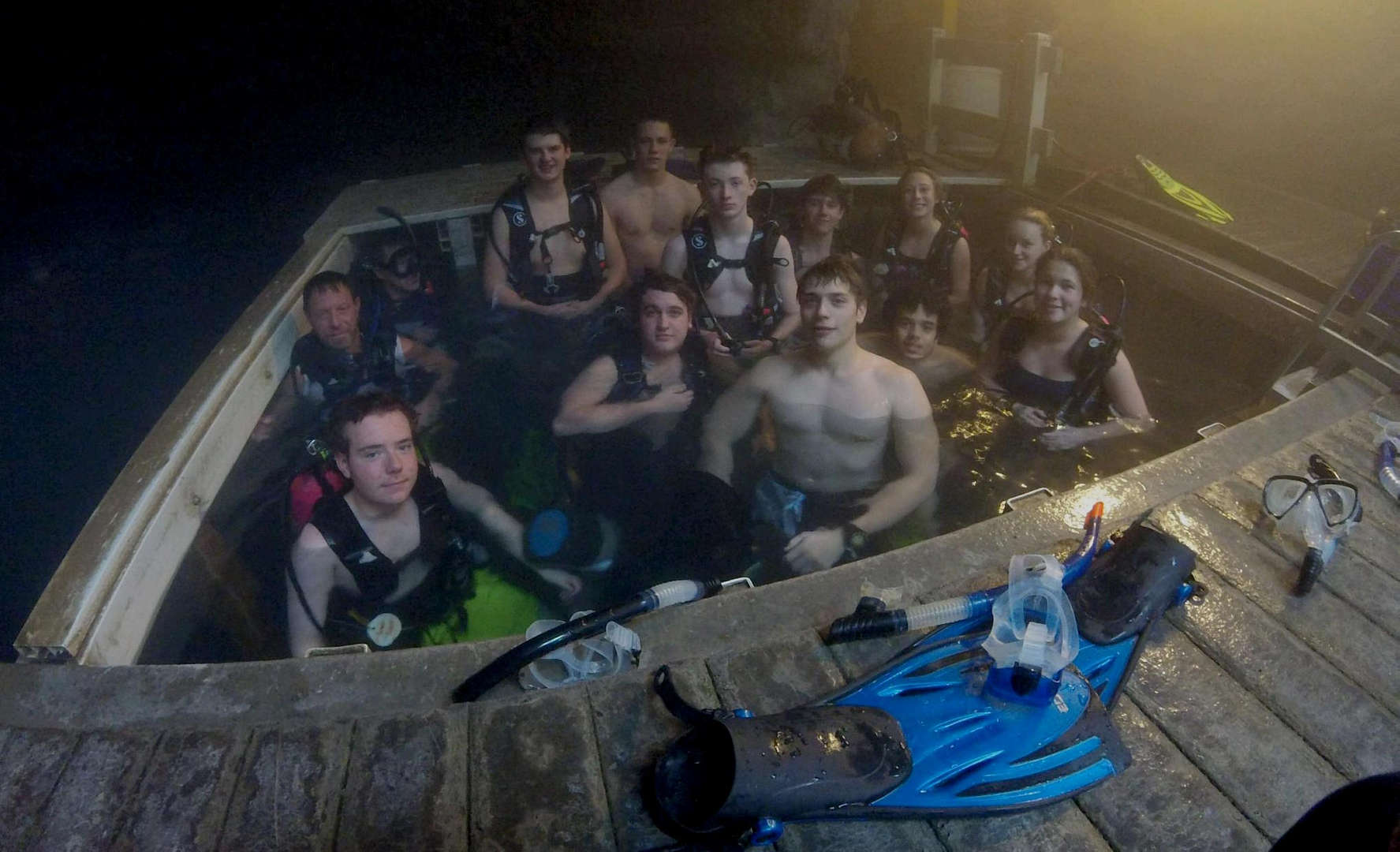 During PAWS testing, Gifted & Talented Teacher Dr. Cristy Pelham visited the eight K-4 schools plus Desert Elementary and Farson-Eden Elementary to provide enrichment activities to kindergarten, first, and second grade students who scored well on their fall NWEA MAP tests. During this time students worked on collaborative problem solving, creativity and innovation, engineering and design, critical thinking and communication, visual and tactile learning, patterns, following directions, and a variety of other STEM related concepts. Each lesson can be tied to common core, International Society for Technology in Education Standards, 21st Century Skills, and the Gifted and Talented standards.

The students rotated through stations, working alone, with a partner, or in groups to complete each activity. At one of the stations students used 3Doodler Pens. Students used the 3D pens to create cubes by following three easy steps. The pens heat up the Eco-Plastic. The students draw a flat square first then, draw up to complete the cube. These 3D pens were purchased with funding from a Sweetwater BOCES grant.

Graduation is a focus for school systems across the country. Over the past several years, SCSD#1 has worked to provide a comprehensive program designed to improve student achievement levels, increase student retention rates, offer students who have dropped out an alternative path to a diploma, and increase high school graduation rates. This program contains the following components:

The district, along with Individuals with Disabilities in Education Act (IDEA or Special Education), and the Wyoming Bridges Grant, purchase research-based intervention programs and technological interventions to support identified students before, during, and after school in working toward recovering credit and graduation.

After receiving his diploma, Joshua Patterson shakes hands with school board member Paul Kauchich. 2016 school board chair, Brady Baldwin and principal's secretary, Marylin Rosette are in the background. 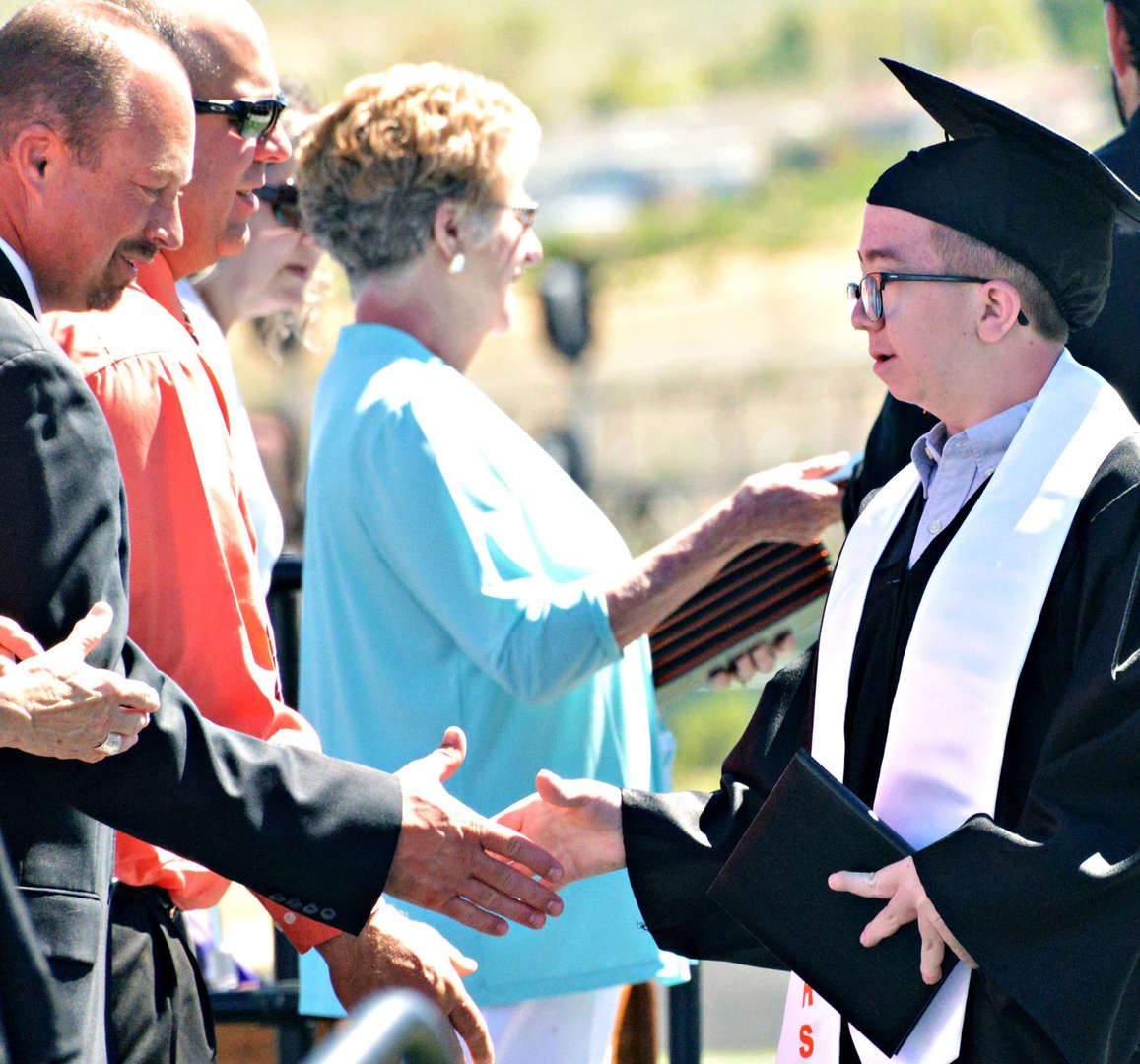 After gaining approval from Sweetwater County School District #1, Shelby and Randi held food and backpack drives and visited non-profit organizations to promote the program in hopes of obtaining funding or donations. The students also communicated with the two original participating schools to send parent permission letters.

Seniors in the Health Academy now run The Project. They plan nutritious meals while keeping noted food allergies in mind. They organize shopping trips then, store and inventory the food. The students fill and deliver backpacks to schools as well. Each year current RSHS Health Academy seniors interview juniors to replace them keeping The Giving Pack Project alive.

More schools would like to be a part of the program, but at this time funding cannot support additional backpacks. It costs approximately $1200 per week to fill the backpacks. Sweetwater BOCES continues to fund the project with yearly grants of $4,000-$5,000. Community members also contribute to the project with monetary and food donations.

Students continue to benefit from Giving Packs thanks to continued support from Sweetwater BOCES. If you would like to donate to The Giving Pack Project contact Bruce Metz, RSHS Health Oscupations Academy Director: metzb@sw1.k12.wy.us or 307-389-9172. 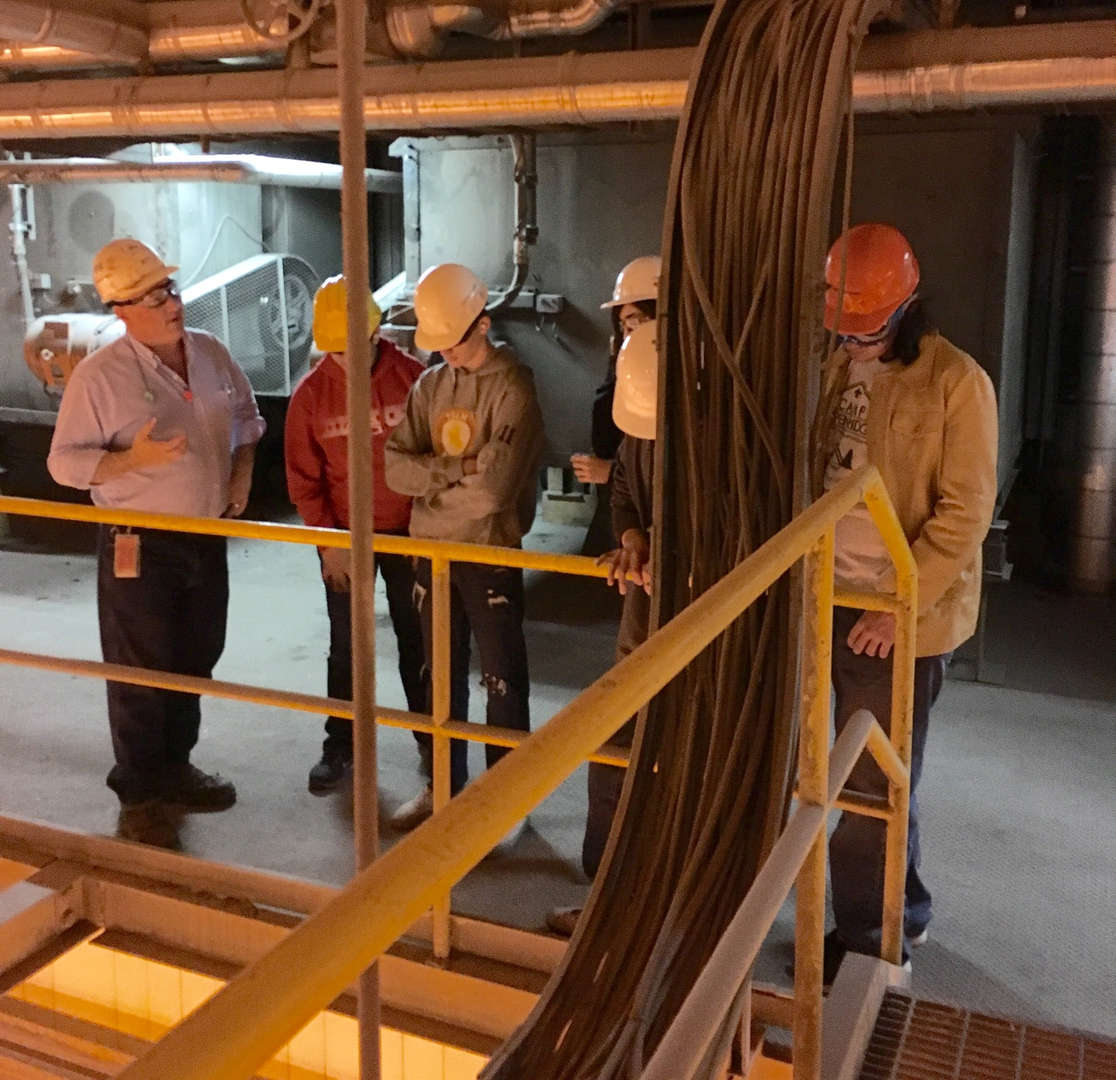 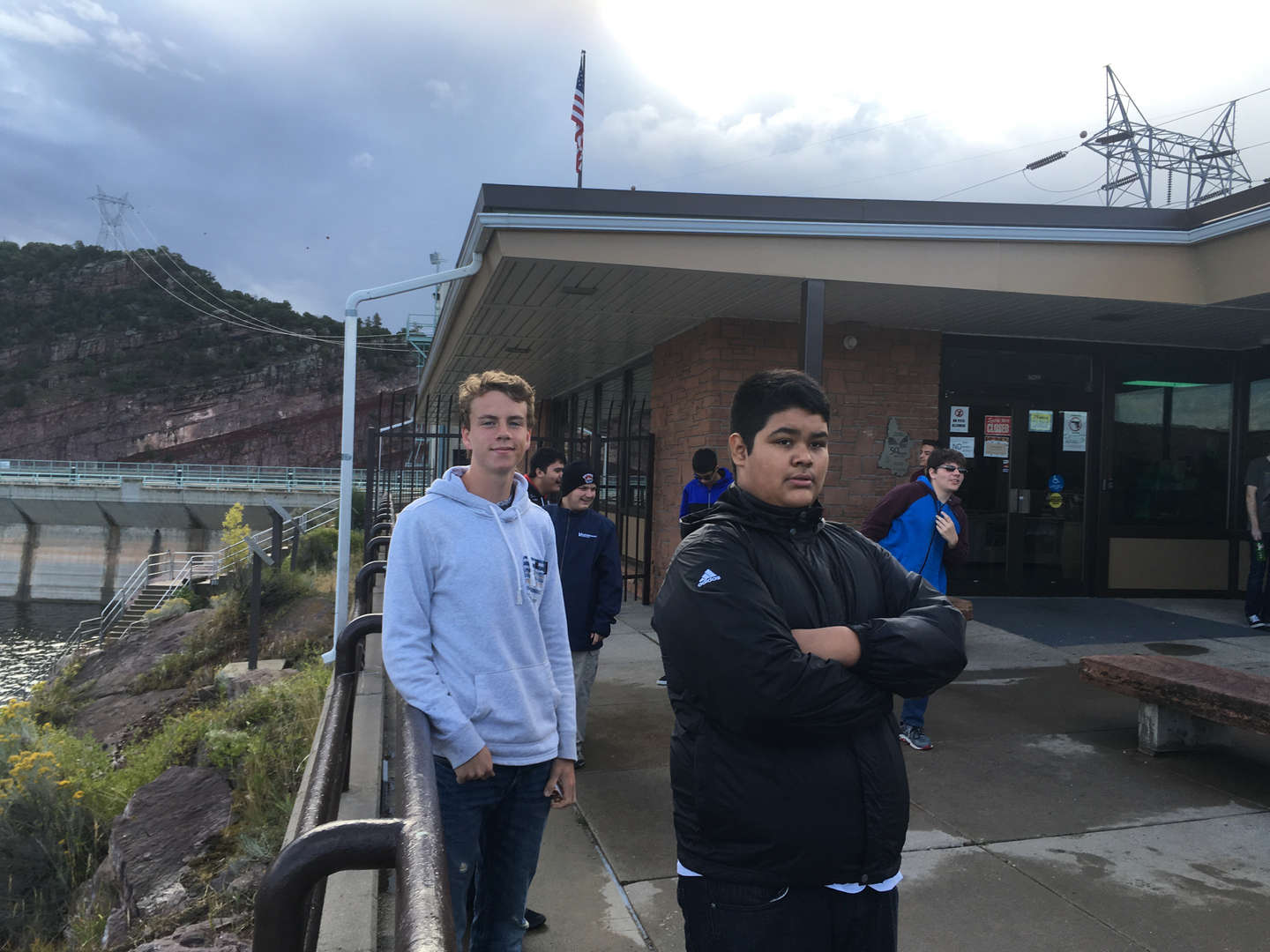 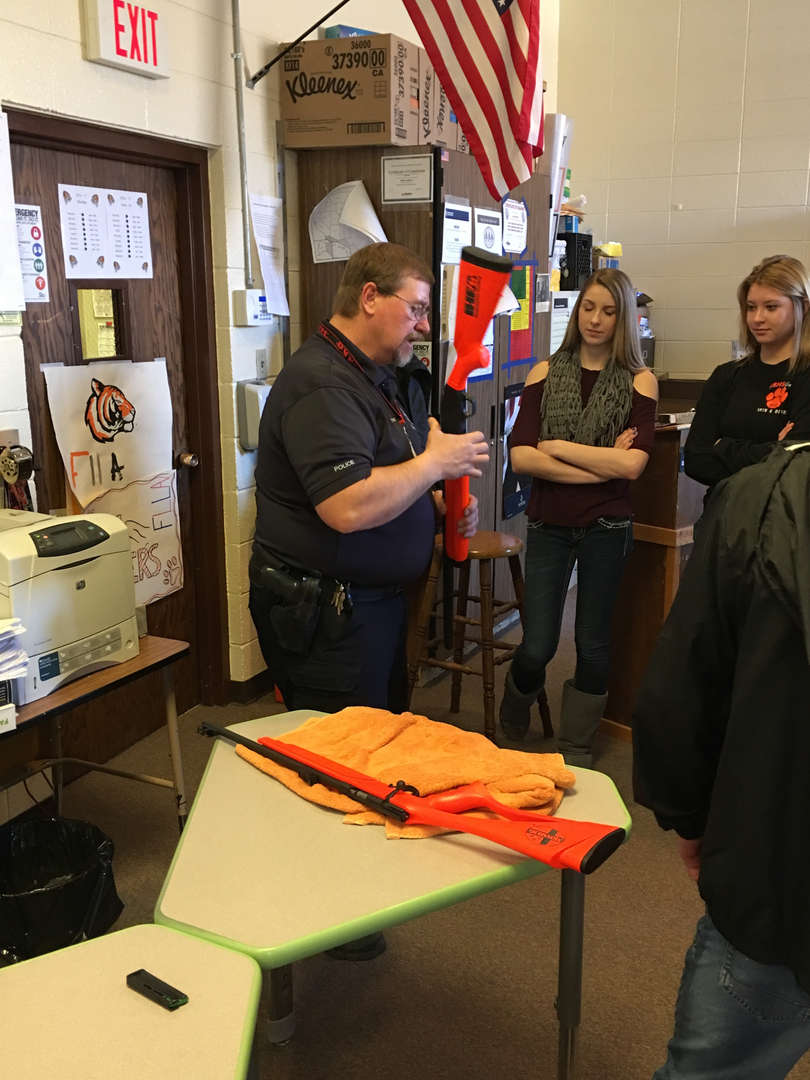 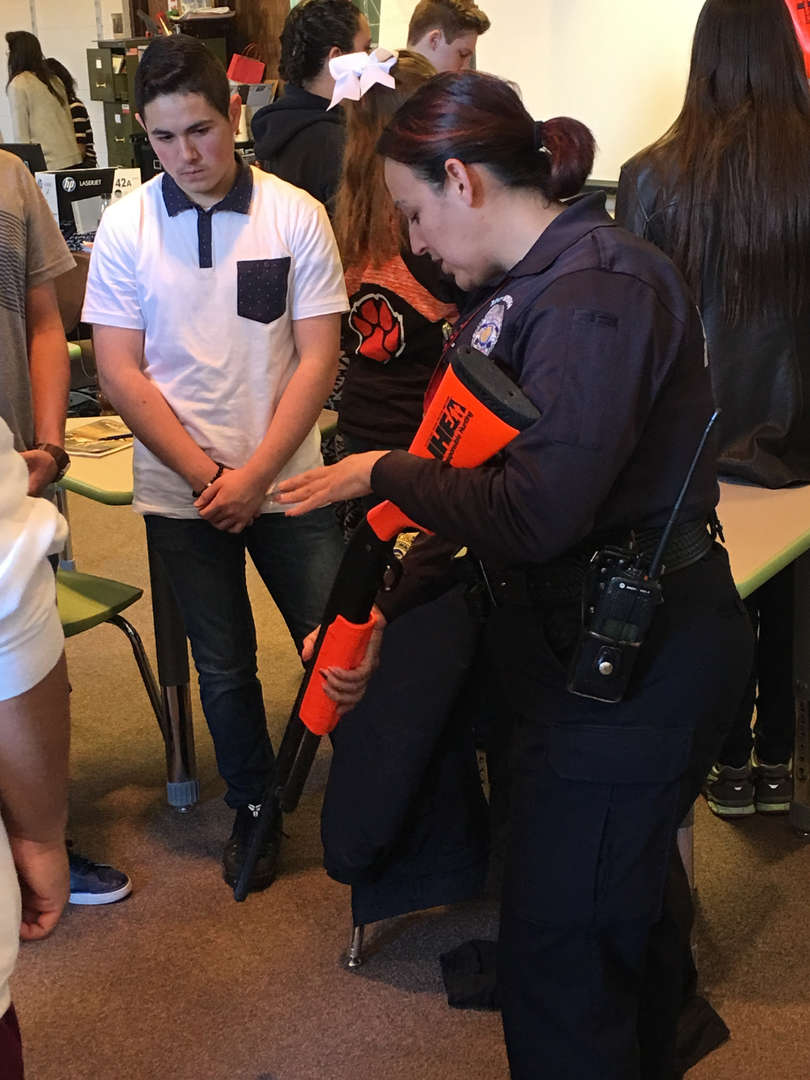 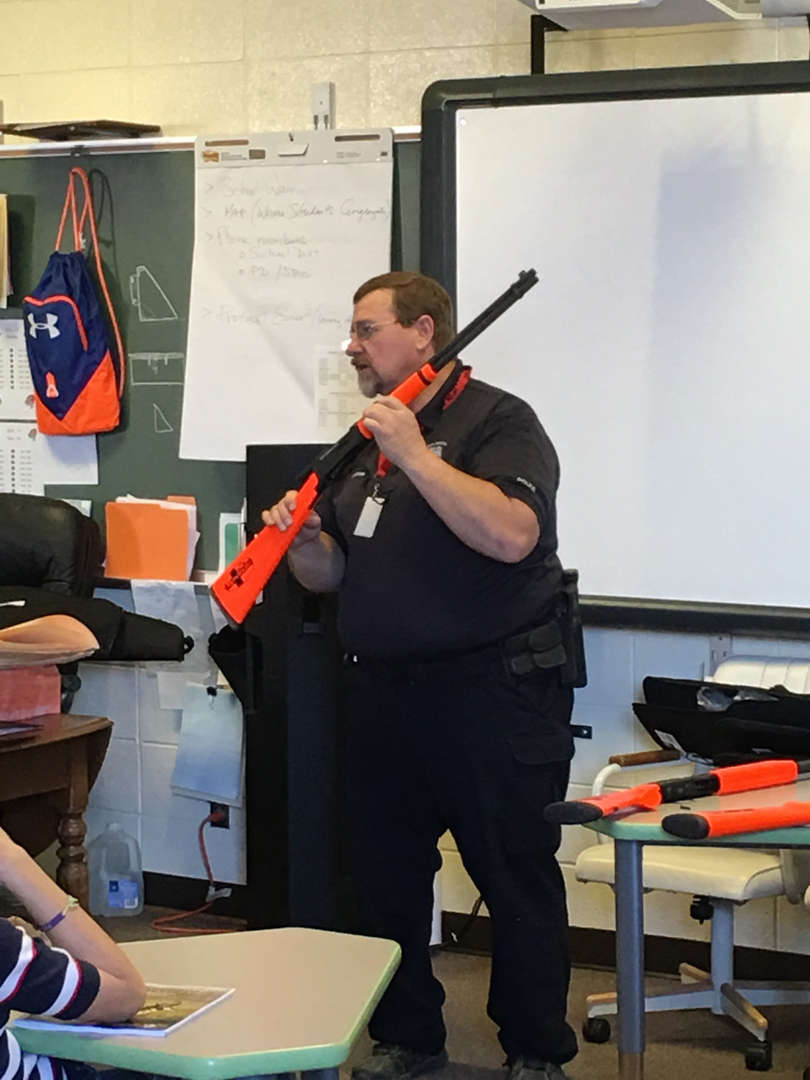 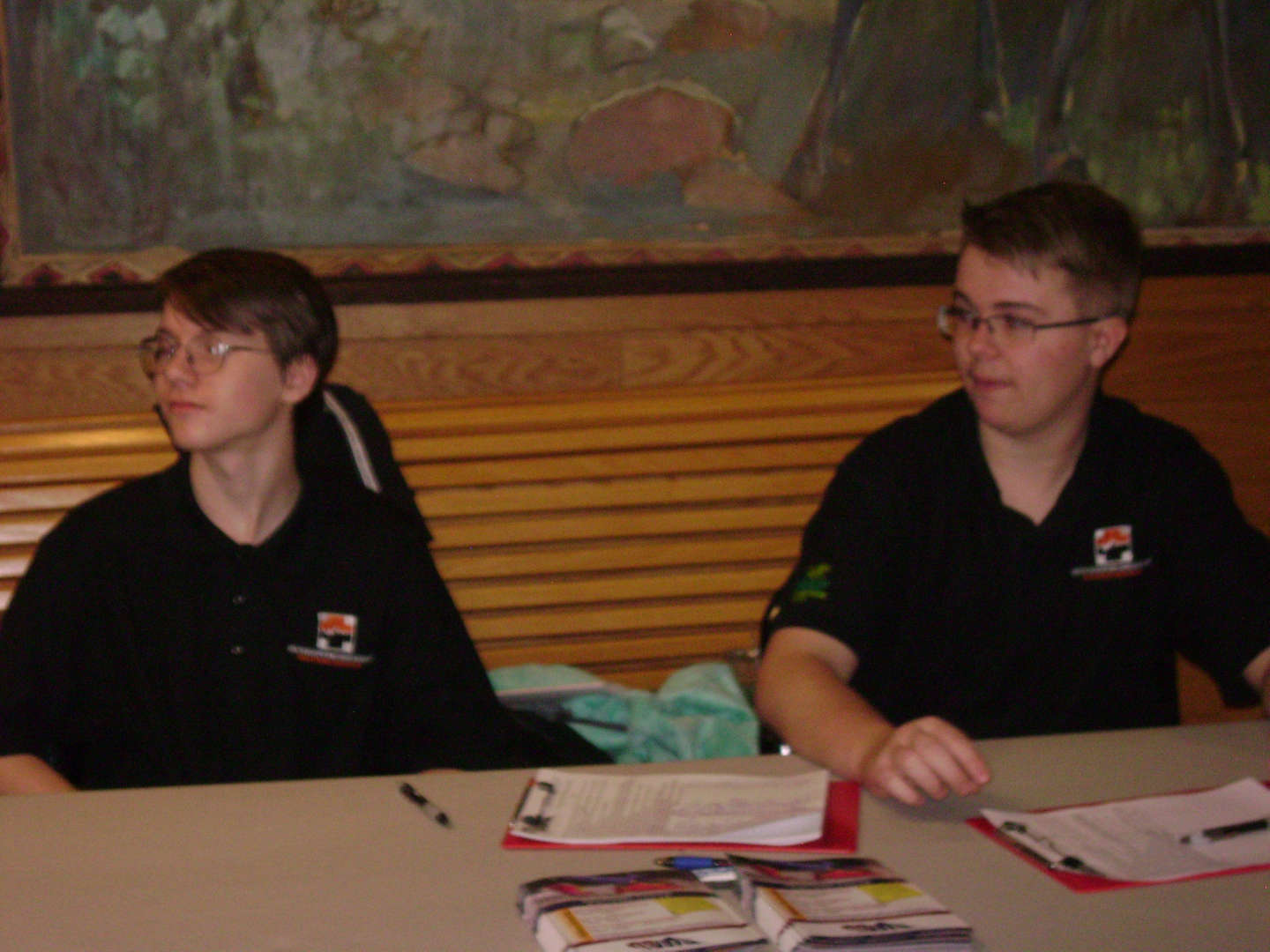 Ragan Ware takes the blood pressure of one attendee, while Kyla Henry discusses body/mass index with another attendee. 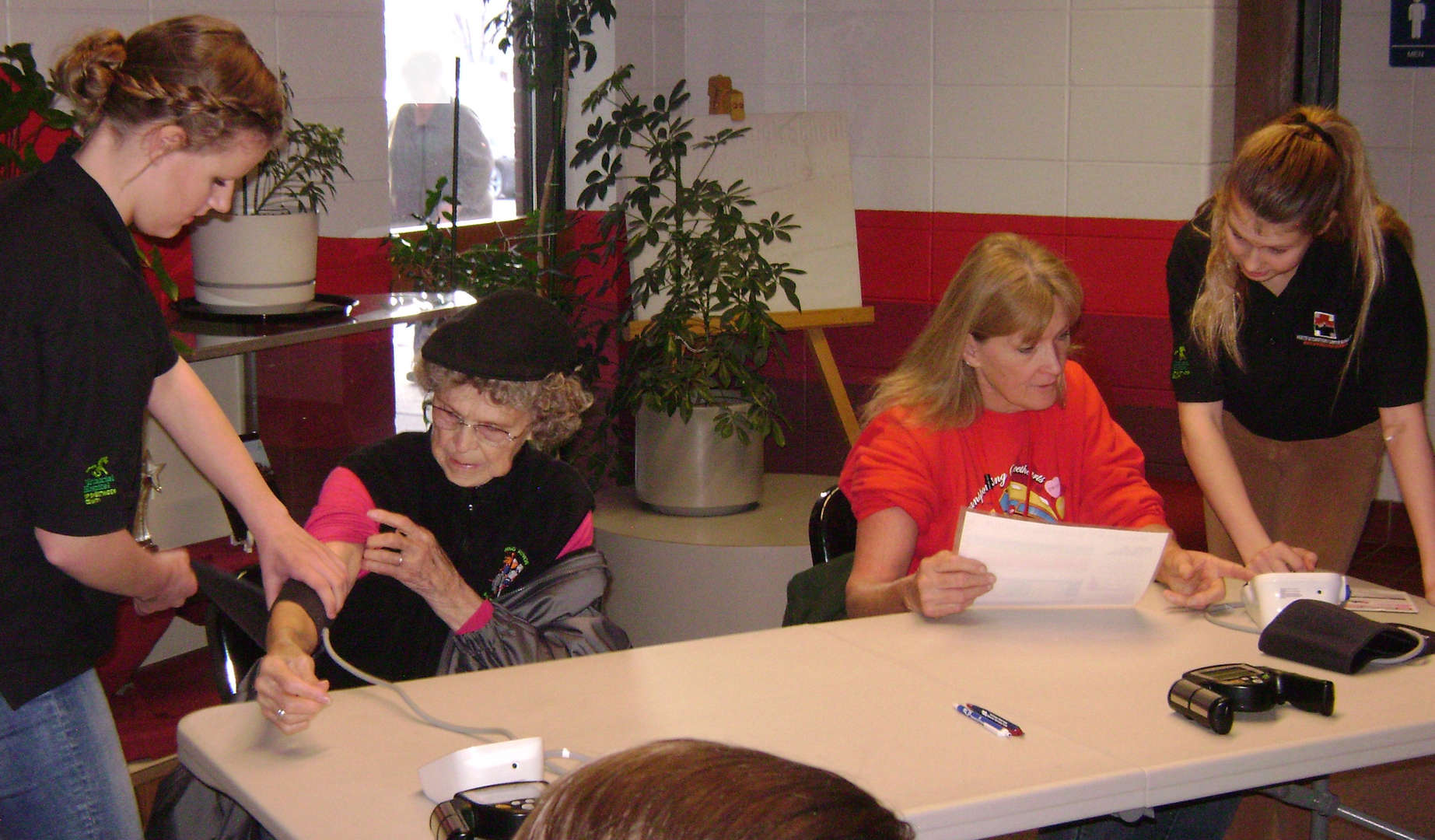 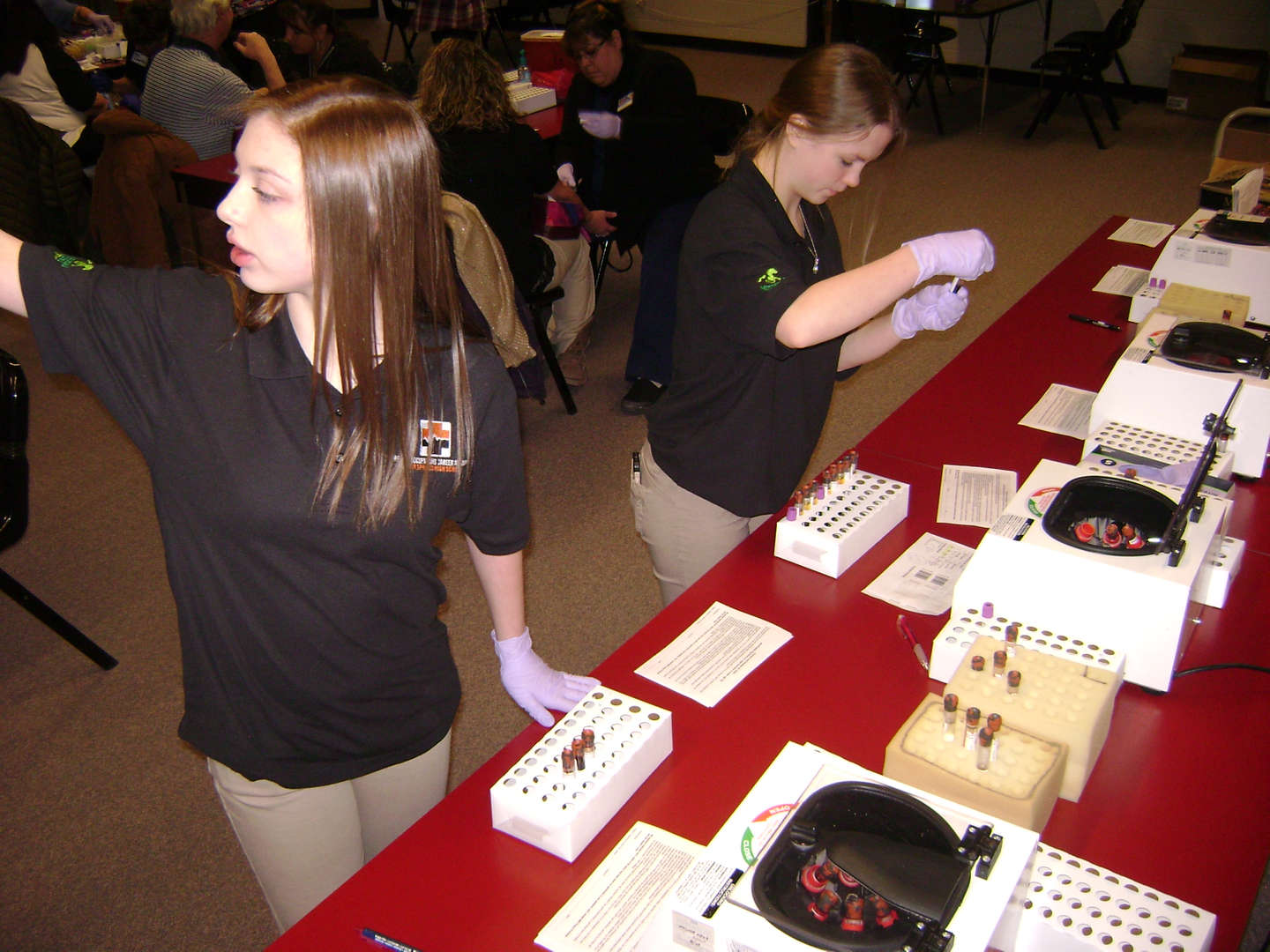 The Reading Intensive Intervention Program targets specific learning gaps and designs individual learning paths for each student. Sweetwater BOCES, along with the district, provides funding to support this program. Students needing to develop necessary reading skill are able to participate in before, during, and after school program focusing on the five essential components of effective reading instruction:

SCSD#1 has developed an intervention program designed to meet the needs of kindergarten through 4th grade students requiring additional support in reading, writing, and math. Interventions take place in and out of the classroom. The district provides substantial funds toward this program, but also receives additional funding from Title IA, the Individuals with Disabilities in Education Act (IDEA or Special Education), Title III, and Sweetwater BOCES. This funding combines to provide technological interventions, equipment, and additional staff.

The Rural Support Program ensures the SCSD#1 rural schools in Farson-Eden and Wamsutter will successfully deliver educational services and support to students in their communities.

SCSD#1 provides the majority of financial support from the district's general fund by providing certified classroom teachers, school counselors, intervention teams, intervention teachers, and paraprofessionals. The district also purchases research-based intervention programs and technological interventions through the general fund as well as through Special Education and the Wyoming Bridges Grant. Sweetwater BOCES funding is used to provide additional staff to work with small groups of students identified as at-risk at Farson-Eden School and Desert School in Wamsutter.

Change is never easy, particularly when the change involves moving from a secure environment to an unfamiliar one. It can be overwhelming for students transitioning from a K-4 school to a 5-6 school or from 5-6 to junior high. For the past several years SCSD#1 has worked to provide support for students in these transitions with tutoring and support classes, double doses of English and/or math instruction, adult advocates and/or mentors, peer mentors and/or tutors, close monitoring of academic performance and attendance of at-risk students, and early identification of students who could be considered at-risk before or during the transition years.

The district supports this program through the district general fund, Title III, Individuals with Disabilities in Education Act (IDEA or Special Education), and Wyoming Bridges Grant.